A little housekeeping first – the zine is still trucking along nicely, thank you to those of you who have already submitted contributions, (I’ll be in touch soon if I haven’t already) and to those of you thinking of submitting something, please do!  I particularly need artwork, even just small pieces to fill in around articles and break up the text. 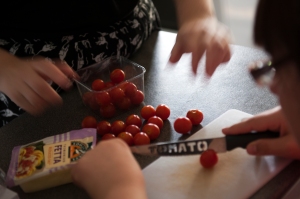 Now, on to the actual topic of this post!  As you know, on Tuesday night I was proud to present at the UQ Women’s Collective Diversity Week event.  One of my fellow speakers was a representative from the Eating Disorders Association Inc (EDA) and she spoke on what eating disorders are, who is most likely to be affected by them, and what methods of treatments there are.  We had some robust discussion during the Q&A portion of the event in response to audience questions.  I only wish we could have answered more audience questions, but alas, we ran out of time.

So it’s probably no surprise to any of you that I have issues with how the health care industry, most eating disorder support organisations and the general community of eating disorder sufferers treat fat people.  Particularly as it is mostly assumed that fat = binge eating disorder, which is nothing short of bullshit.  Can I put that in any plainer terms for anyone?  BULLSHIT.  Fat people are assumed to just be overeaters or binge eaters by way of being fat.  It is often believed that it is impossible for a fat person to have a restrictive or purging eating disorder, or to be involved in disordered exercise behaviours.  Even as much research (and anecdotal evidence/lived experience) there is out there showing how many fat people have engaged in these forms of disordered eating/activity, the medical profession and most eating disorder organisations still do not recognise it in fat people, and instead suggest that “denial” is one of our symptoms of what must be binge eating disorder.

What regularly happens to fat people who present with all of the markers of restrictive/purging/exercise mania is that we are told to “keep up the good work” instead of having our illnesses recognised.  Behaviours which are widely recognised as destructive, disordered behaviour in thin people, are considered a “positive lifestyle change” in fat people and actively encouraged.  It certainly was for many, many years through my suffering.

And it seems that hasn’t changed much.

The first question to the panel on Tuesday night was asking how we respond to the “But what about your health?!” demands.  As the fattest person in the room, it meant a lot to me to make it clear that my health, and in fact anyone’s individual health, is nobody’s business but their own.  That it’s not a subject up for discussion unless the person themselves wish it to be so.  You know, the “If it’s not your body, it’s not your business.” mantra.

The representative from EDA then added that she saw the situation differently, and while she started positively with stating that the same health messages should be given to all people, regardless of their body shape or size (which I agree with), it soon devolved into a lot of deeply healthist and fat stigmatising rhetoric about bell curves of mortality rates in body sizes, BMI, “obesity epidemic” and “weight risk factors”.  I was at pains to point out that as someone at one end of that “bell curve”, most of this rhetoric is deeply problematic as it has a risk of demonising and othering those of us who fall at either end of that bell curve.  It also implies that we require intervention into our health, and ignores the fact that “risk” in no way equals “certainty”.  It perpetuates an assumption that people at the ends of the bell curve are by default defective, rather than just the natural extremes of a diverse spectrum of body types.  It also perpetuates the assumption that very fat people or very thin people by default are inevitably going to suffer health issues and/or shorter lifespans that they are only statistically “at risk” for.  This is not an accurate assumption nor is it a helpful one.

I was grateful that it was also raised by someone in the audience (kudos to Amy if you’re reading this) that BMI is both an inaccurate and ineffectual measure of anything (other than ratio of weight to height) and that it is deeply triggering to not just fat people but also to eating disorder sufferers in general (which was many of the audience – since it was an eating disorders event).  BMI is often the stick that people with poor self esteem and body image, and eating disorders beat themselves over the head with.

Unfortunately, I have found healthist rhetoric like this is alarmingly common from eating disorder support organisations, and while they may be well intentioned, are causing the exclusion of many people based on body shape and size, as well as level of health.  The reality is, many eating disorder sufferers have other health issues or may be people with disabilities as well as those caused by or part of their eating disorders, and these already vulnerable people are often made to feel that they do not deserve compassionate treatment and support because they’re hearing the message that health is the most important factor in treatment and support.

We need to keep repeating the message that not only is health completely and utterly arbitrary, but it is not a moral obligation either.  Moralising health is a deeply ableist attitude.  We need to keep fighting for our personal agency in health care as well.  Yes, occasionally there are people who are genuinely unable to advocate for themselves, these are in the vast minority and most importantly, that cannot be determined by either their weight or their actual physical health.  I believe the ONLY way to assess the inability to self advocate is through thorough and compassionate psychological assessment.

As long as we as a culture continue to define wellbeing and human worth by weight and/or arbitrary health measures, we are engaging in both ableism and fat stigma, neither of which actually help people build better wellbeing.  And it’s not just fat people/people with disabilities who are affected by this.   The fear of fat and stigmatising, ableist messages about health trigger damaging behaviours in people of all sizes and levels of physical health/ability.  As long as people are afraid of being fat or place moral obligation on health, they will be engaging in damaging and indeed unhealthy behaviours to avoid being fat or unhealthy.  It is a vicious cycle of direct cause and effect that we have to break for any progress to be made, and that needs to start with the very organisations who are in place to help break disordered behaviours.

What we need an entire cultural change around health and weight and I believe that eating disorder support organisations and groups need to be at the front of this cultural change, not being dragged along by those of us on the margins.  They have a responsibility to make effort to include and support those of us who are most vulnerable to stigma and bigotry, not marginalise us further.