Do you ever watch an old TV show that you thought you knew really well, and find a whole bunch of new things about it that you missed when you first watched it?  Especially watching something as an adult that you watched as a kid – you notice characters that you didn’t before, story threads that weren’t easy to pick up on unless the series was seen in order, brief roles by people who later became famous, or just understanding jokes and references that went over the head when you were a kid.

Like most people of my generation, I grew up on a solid diet of M*A*S*H – it started the year I was born and I can’t ever remember it not being on television.  It was a firm favourite of everyone in my household – which now surprises me as it’s very progressive for it’s time and I would not have expected it to be popular with my conservative parents.  If it was showing somewhere on TV, then the channel got switched over so we could all watch it.

Recently my library service added the entire collection of M*A*S*H to the catalogue, and as it had been some years since I’d even seen an episode, I decided to wade in and watch the entire 11 seasons.  It’s been MONTHS since I started and I’m only up to Season 10 right now, but I’m on the home run and while I’m sure I’d seen every episode already, I have learnt so much about the series and characters while I’ve been watching.  Like what?  Well, let’s see…

But there’s one thing I’ve really discovered as I’ve watched the series.  My favourite character isn’t any of the above central characters.  My favourite character is lucky to have one or two lines per episode and her story isn’t always consistent.  In fact her name isn’t always consistent.  She is a short, chubby woman of colour.  She is Nurse Kellye, played by Kellye Nakahara. 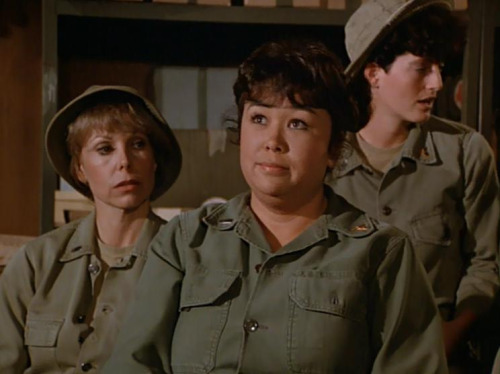 Nurse Kellye is probably in more episodes than anyone else, except Hawkeye, who was in every episode.  She’s always there – in the background in the mess tent, working diligently in the OR or Post-Op.  She dances with almost every major male character in the Officer’s Club at some point over the series.  In the later series, she has a line or two in almost every episode, and in the final series she has a whole episode to herself.  Her surname changes repeatedly throughout the show (sometimes they even use the actress’ real surname Nakahara for the character – it’s never really outlined what her full name is) as does her heritage.  At one point she mentions that she’s part Chinese, part Hawaiian, but later on she’s referred to as Japanese-Hawaiian.  We do know that her rank is Lieutenant at least.

But she’s always there.  How many other women that look like Kellye Nakahara can you name in ANY television series, let alone one from the 70’s and 80’s who is always there, and is always shown as smart, competent, compassionate and professional?  How many chubby women of colour characters can you name that aren’t the butt of a joke, or portrayed as klutzy, or incompetent, or over-sexed, or silly? 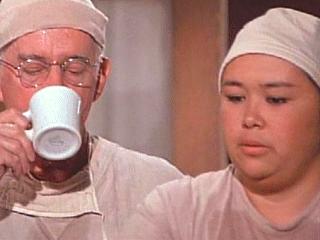 But there Nurse Kellye is, with her cute pigtails and sweet face, pretty much every episode, working beside the doctors and even respected by all of them – which is saying something when you remember Hawkeye’s attitude to the nurses.  She’s multi-lingual, a dedicated and more-than-competent nurse whom the doctors look to for information and advice on more than one occasion.  I particularly like that she was repeatedly shown socialising with Major Winchester – from being his dinner date when Klinger had set up a fancy restaurant in the mess tent, to asking him to dance (and he accepts graciously) in the Officer’s Club when a visiting USO performer strikes up a polka.  She wasn’t the butt of a joke in those scenes, she was just a woman socialising with her male colleague. 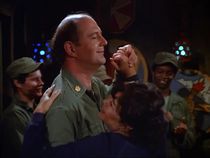 When she does get to participate in a joke, she gets to be part of the gag, rather than be the butt of it.  Her flirting with Hawkeye when he is working in Rosie’s bar is not a joke at her expense, it’s her being cheeky to her colleague, an officer who outranks her, who has ended up serving behind the bar in the local den of iniquity, subverting the joke that has her as the GI chasing the bar-staff, rather than it being his usual role. 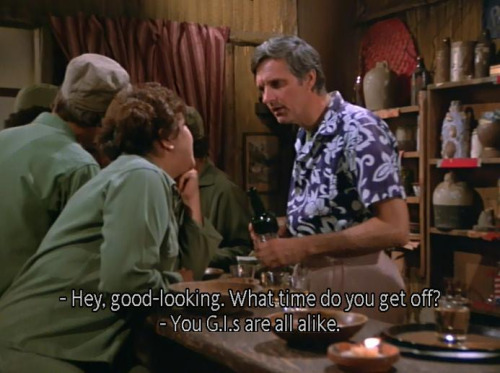 In an era when women of colour were scarce on our TV screens and women who were not slim and “pretty” by conventional standards were almost always the objects of ridicule, seeing a consistently positively portrayed Asian-American woman with a short and chubby frame is SO refreshing.  We know that Nichelle Nicholls is a trailblazer in television with her role as Uhura in Star Trek, but has anyone ever acknowledged Kellye Nakahara for her 165 episodes of pure badass awesomeness in M*A*S*H?  We almost never see women like her in roles today, so there is no doubt at all that she too, was a trailblazer for her time.

4 comments on “A Tribute to Nurse Kellye”